When you talk about tablets, it’s almost a certainty that you will mention Samsung at least once, as the Korean manufacturer is on top of the market, right next to Apple and its iPad devices. The tablet market provides numerous options from various manufacturers, but Samsung in itself could be an entire tablet market if you look at how many devices it shoots out its production line each year. In this article, we’re taking a look at two of Samsung’s tablet devices, namely the Galaxy Tab S 10.5 and the Galaxy Note Pro 12.2.

The device features a sleek look and draws its name from the size of its screen, which is 12.2 inches. The screen is also one of the device’s highlights, as the tablet supports the Multi Windows mode seen on recent Samsung smartphones, which allows the screen two split into two or four and allow efficient multi-tasking.

A quad core Krait 400 processor clocked at 2.3 GHz will take care of tasks easily, while supported by 3 GB of RAM. The internal memory is 64 GB. The camera on the Galaxy Tab S 10.5 has 8 MP, and is complemented by a 2 MP front facing camera. All these impressive specs might drain some battery life, but that’s not a problem with the included 9500 mAh unit that sustains the device’s life.

Google’s presence is acknowledged through the Android KitKat operating system, which gives the tablet a big plus.

You shouldn’t shoot this one down just because it has a smaller screen. At least not yet. Let’s see if there’s something in this device that can turn thing around for the Tab S 10.5.

In terms of processing power, the tablet uses an octa core processor, featuring Cortex-A15 and Cortex A-7 units. The CPU is clocked at 1.9 GHz and it is combined with 3 GB of RAM and 32 GB of storage capacity.

The camera doesn’t present any improvements, as it carries the same 8 MP rear camera and the 2.1 MP front facing lens.

The same Android 4.4 KitKat operating system is present, alongside a large 7900 mAh battery.

There are strong points on both sides, at it really depends on what you’re looking for, as the Pro 12.2 comes with a larger screen and battery, wheras the Tab s 10.5 excels in design, with a much more sleek appearance. 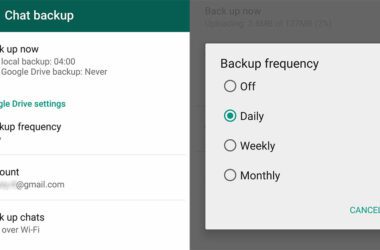 If you’ll check the official website of WhatsApp, in the Download section, you’ll see the 2.12.44 APK version,…