WhatsApp is the new “it” app for smartphones.

It’s a messaging application, designed so that users can send text and voice messages to other smartphones, without paying SMS rates. It was developed by two programmers from Yahoo!, and over 20 billion (that with a “b”) messages have been sent since the application was released.

Installing and using WhatsApp is easy, and the method is the same regardless of the kind of smartphone. It’s available for Android, Windows Mobile, Blackberry and Nokia Symbian. To download the app, simply go to the WhatApp website on your smart phone, click on the “Download” tab in the top menu bar, and then click the first link on the page. The website will see what kind of phone you have, and then prompt you to download the correct application. Once the download finishes, click on the app to prompt installation. WhatsApp will get your phone number as it installs, so it automatically knows who you are.

Alternatively, Android, Windows and iPhone users can do a search for the apps name in their respective app stores. WhatsApp is free to install, and the free trial lasts for a full year. After a year, WhatsApp costs $0.99 a year to stay functional. The fee is currently WhatsApp’s only revenue stream, and advertisements are never served on the app.

Once the app is downloaded and installed, setup is a cinch. Open the application, and then open the “favorites” menu (labeled “contacts” on Android devices). It will automatically check your phone’s contact list, and the phone numbers of other WhatsApp users will appear on the list. If someone doesn’t appear, simply add their phone number to your contacts, open the application, and then refresh the menu to make the number appear.

Both parties must have WhatsApp installed for their name to appear in the favorites menu. WhatsApp is designed to communicate between users rather than their devices, and it’s that feature that allows it to avoid costing as much as an SMS. If a contact doesn’t already have WhatsApp installed, their number will not appear until they install it, and users won’t be able to use WhatsApp to communicate with them. Once the app is installed, however, they will show up in the favorites the next time the app is refreshed.

WhatsApp has the capability to do more than just send text messages. As a chat service, it can handle up to 50 participants in a single group chat. It can also be used to leave voice messages, share media, and transfer data. Note, however, that although using WhatsApp doesn’t count as an SMS when it comes to charges on the phone bill, every message sent by WhatsApp is made up of data, and the user is charged for that data, making the app especially useful for unlimited data plans.

The beauty in WhatsApp is in its design. The creators have made it as simple as possible for the user to install, with an intuitive interface. It is still being actively developed, so certain bugs may crop up (it doesn’t work in Uzbekistan, for some reason), but their website has a number of well-documented solutions, and they’re constantly improving. 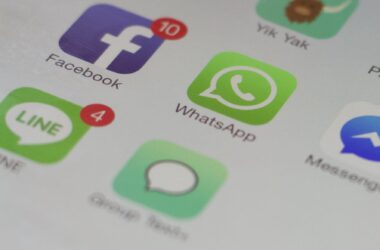