For those who still remember, this comes only a few months after Apple unleashed their two iPhone 6 siblings. Now the big question is—can the Blackberry Passport stack up against the iPhone 6?

Yes, it can. And here’s a rundown of how the challenge would go:

For a starter, the Blackberry Passport comes with a 4.5-inch square IPS LCD display with a resolution of 1440 x 1440 pixels (453 ppi). That goes without mentioning the three-row QWERTY keyboard and the stainless steel frame the phone is made of.

The iPhone 6, on the other hand, sports an aluminum body with round corners and curved edges that give it an elegant, modern look. With a 6.9mm thickness and a weight of 129 grams, the phone features a 2.7 IPS LCD 4.7 inch display with a resolution of 750 x 1334 pixels (326ppi).

Now judging from this, the Blackberry passport gets a clear win on the display for having a higher pixel density than the iPhone 6’s.But when it comes to design, no one can deny that iPhone 6 is more attractive than the Passport, given that it’s slicker and about 50 percent Lighter.

The Passport runs on Blackberry 10.3 OS and features Qualcomm’s Snapdragon 801 processor with a clock frequency of 2.2GHz. It’s supported by 3GB of RAM and an Adreno 330 GPU. The phone comes with an inbuilt internal memory of 32GB, with a microSD slot that can support up to 128GB of additional storage.

The iPhone 6, on the other end, runs on the latest iOS 8 and is powered by a dual core A8 processor with a clock speed of 1.4GHz, and an M8 co-processor which handles the bulk of the phone’s processing needs. Though Apple hasn’t revealed anything about the internal specifications of the phone, there has been a lot of speculation about it using 1GB of RAM. For storage, the phone—like any other iPhone–doesn’t support MicroSD, but its internal storage comes in three variations: 16GB, 64GB and 128GB.

Given that the two phones use different types of processor and OS, it’s pretty hard to select a winner in this category. But Apple gets a big plus for developing its own hardware and software. But all in all, both phones are excellent performers, even though a good number of reviewers have actually ranked the Passport slightly above the iPhone 6 after getting both of them tested.

The Passport comes with a 13 megapixel rear camera, alongside flashlight and autofocus—both of which enable the user to make clear shots under low-light conditions as well as make 100% coverage. It also features a 5x digital zoom and a 2Mp front camera. Plus, it can support a 1080p HD video recording at 60fps.

Then there’s the iPhone 6 on the further end with a primary camera of 8Mp, digital stabilization, as well as phase detection autofocus. For extras, there’s the HDR and panorama among others, even though the camera can only shoot 1080p videos at 60fps. Also worth mentioning is the phone’s ability to shoot slow-motion videos at 240fps.

The pixel difference is only but a small part of the equation when it comes to determining image quality. If anything iPhone 6 is currently considered one of the smartphones with the best cameras ever. And when tested against the Passport, a lot of snappers have been quick to place it at the top as far as image quality goes.

The Blackberry passport is approximately $150 cheaper than the iPhone 6. According to the CEO of Blackberry, the phone is still making outstanding profits even at the existing price point–$599.

So to round it up, we’re pretty much on the fence with this one and whilst there is a clear winner in some aspects of the phone, the same phone might  a clear loser in other aspects. It just depends what you need from your phone, to suit your needs.

The HTC One M9 will be a unique phone in many aspects. But the key difference between the… 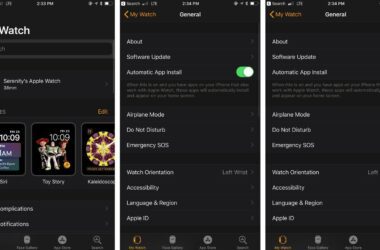 How to Install or Uninstall Apps on your Apple Watch

Apple Watch has taken App Store by a storm. With apps specifically designed for Apple Watch ranging up…

Since the release of Fallout 3, each year has been another source of disappointment for the fans, as…