The impact of a rocket body into the surface of the moon on March 4 resulted in the formation of a fresh twin crater on the moon.

The position of the peculiar crater has been pinpointed thanks to recent photographs that were obtained by NASA’s Lunar Reconnaissance Orbiter.The impact formed two overlapping craters, one spanning 59 ft (18 m) in diameter on the east as well as 52.5 ft in diameter on the west (16 m). Combined, they form a hollow with a length of about 91.8 ft (28 m).

Even though the rocket fragment was on course to crash with the lunar surface, scientists anticipated the collision to occur, but the twin crater it formed was a stunner. The motor section of a used rocket often has the largest mass since the remainder of the space craft is mostly empty fuel. However, the presence of a second crater shows that this projectile struck the moon with considerable weight on both ends.

Because the spacecraft debris had been flying about in space for years, scientists could use the twin craters to figure out its origin. Because the moon lacks a shielding environment, it is covered with craters caused by asteroids crashing onto its crust on a continuous basis.

As far as the specialists are aware, it was the first instance in which space trash accidentally fell on the surface of the moon. Craters have been formed by spacecraft purposely crashing onto the Moon.

The mystery surrounding the rocket stage’s provenance has highlighted the necessity for government authorities to monitor deep-space garbage more carefully rather than depending on the scarce funds of individual persons and researchers.
Space junk from low orbit, where it may smash with satellites, spawn additional trash, and pose a hazard to crewed spacecrafts, is a greater problem, according to scientists.

Mars’ potato-like satellite, Phobos, has crossed the front of the Sun in spectacular fashion, as taken by the Mars… 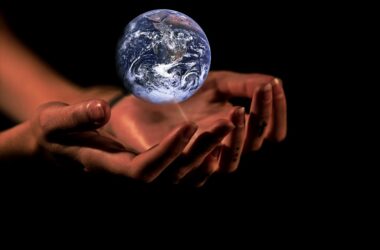 According to recent computer projections, higher temperatures attracted plants—and hence even warmer weather. Shifting vegetation has had a…